ROUND ROCK, Texas — The Texas Young Republican Federation held its 87th State Convention this past weekend at the Kalahari Resort in Round Rock, Texas with Governor Greg Abbott serving as the Keynote Speaker at the Annual Gala. The Convention hosted by the Williamson County Young Republicans was the largest in over 30 years, topping off a record year for fundraising, deployments to win elections around the state, national deployments to swing states, sending the largest delegation to the Young Republicans National Convention, and many more achievements.

Additionally the Texas Young Republican delegations from around the state elected the first ever Hispanic State Chairman, Joacim Hernandez, a significant milestone as we celebrate National Hispanic Heritage Month.

“As we recognize 60 million Hispanic Americans this month for their achievements and contributions to our nation, I am honored to be elected by my peers as the first ever Hispanic Chairman of the Texas Young Republicans,” said Hernandez. “This State Convention was the largest in over 30 years, and our Texas Young Republican Federation is stronger and more unified than ever as we engage young conservative voters from all demographics in our state. I’m proud of the work we’ve accomplished and I look forward to continuing to build on our success and momentum heading into the 2021-2022 election cycle as we recruit, train, and elect young conservatives across Texas.”

“I was proud to join the Texas Young Republicans for their convention,” said Abbott. “It is inspiring to see so many fired up young leaders and I look forward to continuing to work with them to keep Texas red!” 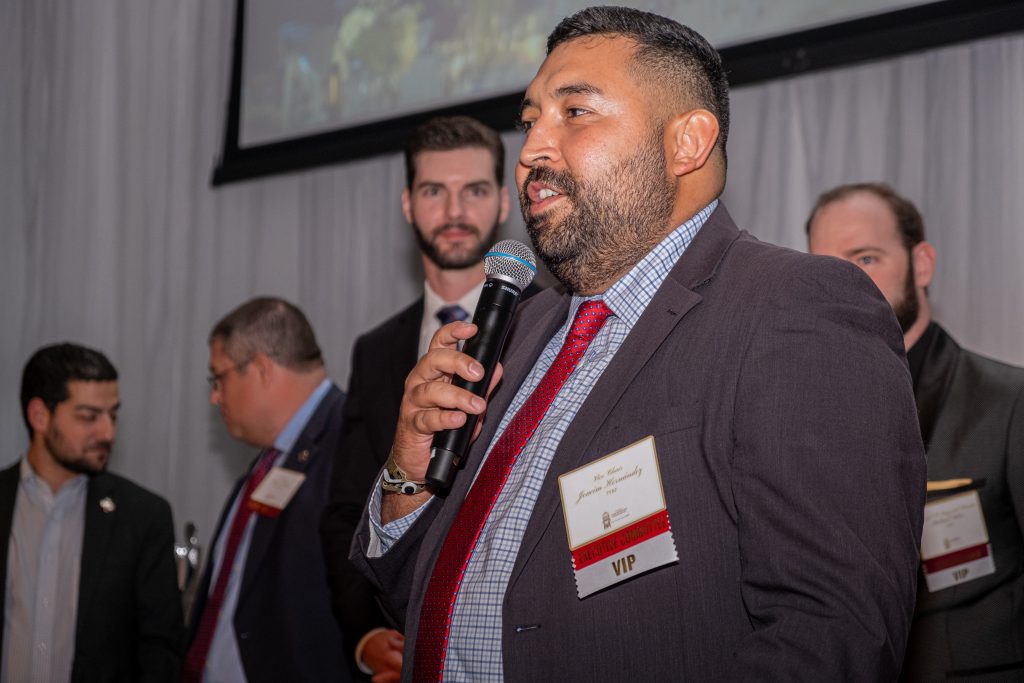 Governor Abbott presents the keynote speech at the gala.

Outgoing TYRF Chairman Hayden Padgett was recently elected to serve as National Co-Chairman of the Young Republican National Federation alongside National Chairman Rick Loughery, who was also in attendance at the Texas State Convention.

“Serving as the Chairman of the Texas Young Republicans for the last three years has been a joy and an honor,” said Padgett. “I had the privilege to serve the most dedicated conservative activists in Texas, to ensure Republicans retained control over our state, and to coach dozens of club and state leaders. I am supremely proud of what our team accomplished during this time and thank all of my colleagues for their work, support, and friendship.”

Hernandez, who previously served as Treasurer and Vice Chairman over the last three years, will now lead an Executive Board of newly elected and returning officers, including:

A bid to host the 2022 TYRF Convention in Hidalgo County was approved during this year’s convention.

The Texas Young Republicans are the young professionals of the Republican party, charged with electing Republican candidates throughout the great state of Texas, and dedicated to preparing the next generation of conservatives leaders. We are an official Republican Party of Texas auxiliary focused on Republicans ages 18-40. We have over 2,200 active members, 35 chapters across the state, 40 elected members, and over 1.2 million annual voter contacts, and we are growing. For information about the Federation, visit texasyr.gop.